They say March is our biggest month for snow.

They say March is our biggest month for snow.  It probably is.  On the first of March 1 have a tradition. I reread Jack London's "To Build A Fire."  It's about some guy who's desperately trying to start a fire cause he's freezing.  It's readily available in anthologies and even online.
Posted by David B. Riley at 8:28 PM No comments:

Nick parked the yellow Caddy in front of the fireplug and went inside the motel.  He noticed a tall fellow standing behind the front desk.  "Hello, can I get a room?"
"Sureee," the fellow with the "Elliott" name tag replied.  "You want one with roaches or no roaches?"
"Uh, I guess no roaches," Nick answered. "Uh,?"
"Boss only had enough money to hire an exterminator for half the hotel," Elliott anticipated. "Of course, the roach rooms are a little cheaper."
"I think I'll splurge and get one without roaches," Nick said.
"Okay, you mind sharin?"
"Sharing? I have to share a room?" Nick asked.
"We're out of roach free rooms.  Guy in 14 said he'd share," Elliott explained.
"So, there's an extra bed in the room?"
Elliott chuckled. "Not hardly, mister."
"I see.  Maybe I'll try the Holiday Inn," Nick said.
"Okee dokey. Course, all their rooms got roaches," Elliott said. "Mice too."
"Are you sure?" Nick asked. "That doesn't seem quite right?"
"Yep, same guy owns that place too."
Posted by David B. Riley at 11:58 PM No comments: 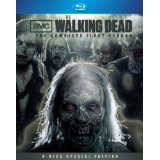 I've become addicted to a TV show on the AMC network--The Walking Dead.  I found this really surprising since I've never particularly liked zombie stories.  And that's what this is. Most people have either died or turned into zombies and only small bands of humans remain.  It's kind of like Lost, only with zombies instead of polar bears.  Faced with the choice of the Academy Awards or zombies, I chose zombies. I was not disappointed. I don't know if I've ever liked a TV show more--and I'm really picky.
Posted by David B. Riley at 8:59 PM No comments:

Weird westerns seem to be enjoying a slight upsurge. This one is an omnibus collection of two short novels and a few shorter pieces about Miles O'Malley, a lawman equipped to deal with the unusual, everything from ghosts, monsters, and aliens to a resurrected Mayan deity. By its nature, the story is episodic although it's patched together into an overall narrative. The stories are quite imaginative and there are only a few rough spots in the prose, and some of the adventures are at least mildly tongue in cheek. This is really more of an occult adventure story than horror, in tone at least, and there's even a touch of science fiction. If you wish that Max Brand and Luke Short had written weird fiction - actually Brand did write some - then this is a book for you. 2/23/12
Posted by David B. Riley at 12:23 PM No comments:

Over at science fiction trails [ www.sciencefictiontrails.com ], where I am publisher, there
is a preview of the cover for our forthcoming anthology, Low Noon.  I'm not going to put it up here until the book is released.
Posted by David B. Riley at 10:21 AM No comments:

In honor of the Oscars, I thought I'd put up some movie trivia you may not know:

Uma Thurman owns a Burger King franchise in Great Falls, MT
Queen Elizabeth is a huge fan of the Harold & Kumar movies
Before becoming a senator, barrack Obama starred in a remake of Shaft.
The remake of Miami Vice starred Ronald McDonald in the Tubbs role.
New Jersey governor Chris Christie produced all seven of the Harry Potter movies.
George W. Bush had a cameo role in High Plains Drifter as Pervis, the shopkeeper.
Mick Jagger had an uncredited part in Blade Runner.
The camera crew for Borne Identity were actually CIA spies working undercover in Europe.


And, on another movie front, my script for The Green Hornet versus The Frito Bandito still remains unsold.  Enjoy the Oscar show.
Posted by David B. Riley at 10:31 PM No comments:

My book Flying Saucer Stories got a really nice review from a major science fiction author on SF Site.

Now, I'm just going to mention a few movie titles to see if it attracts folks to this blog. War Horse, The Artist, Cowboys & Aliens. Girl with the Dragon Tattoo.