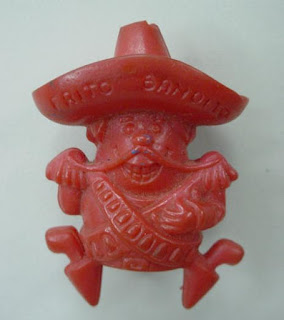 Well, I still haven't gotten any interest in my movie, The Green Hornet Versus the Frito Bandito.

I had a Frito Bandito pencil eraser as a child. I wish I still had it. It, like my Batman stuff, are long gone. The Frito Bandito was removed from TV land because certain Latino groups protested that the character was racist. It probably was, but he just wanted some Fritos. Strangley, Speedy Gonzalez, the Warner Bros.cartoon character,  never seemed to garner such resentment. I used to have a Speedy Gonzalez cartoon character glass, but some crooks at an auction ripped me off.

Anyway, the only thing I haven't entirely figured out   with my movie is what to do with the cute red haired girl. Otherwise, it's basically a rap.
Posted by David B. Riley at 12:16 AM