Former Emmerdale actress Jenna-Louise Coleman has landed the role of the Time Lord's new companion on Doctor Who.   That's not news, really. The last companion, Karen Gillam, and her husband Rory had pretty well run their course.  Now, I'll miss Amy Pond (Gillam) very much.  She made quite an impression when she first arrived.  I've always rather liked tall redheads.  I've also always had certain fantasies about British police women (yes, naughty fantasies). Amy first appeared dressed as a police woman, though one in an extra short skirt.  [She really wasn't a cop, but a kissing telegram].  Anyway, she got my attention. But, my delusional fantasies quickly faded when she hooked up with this Rory guy. Now, I just don't care anymore.  The new one's pretty cute.  I would've just killed off Rory and put Amy in a short skirt and I'd have been happy.  Amy's character actually first appeared as the seven year old Amelia Pond, technically. The Doctor stood her up when he was going to take her somewhere. I think a spunky seven-year-old companion would have been an interesting storyline, but they didn't ask me.  I'd also love for the Doctor to take off with a Frito Bandito-like character. A Mexican bandit would be way different than a Brit babe.  But they didn't ask me. I'd love to write a Doctor Who Episode. That ain't gonna happen. 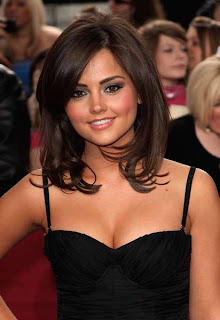