Things in the night

I’ve been thinking about buying a little trailer that I can sleep in if I go fishing or traveling or stuff.

About a year ago, I was eating lunch at the local diner and this lady was talking to the manager of the diner. The lady had gone camping and they’d been kept up by animal noises. Well, turns out she recorded them on her digital camera. There really wasn’t any video as they were inside their "camper." Anyway, she played the noises and said her husband had insisted they were wild pigs. She was having doubts. She asked the diner manager what she thought they were.

The second I heard them, I knew exactly what they were. I went over to her, butting in to the conversation, and said, "Those aren’t pigs. That is a Bigfoot howl."

The look on her face was one of shock, but she knew I was right. Anyway, I’ve heard recordings of Bigfoot howls before and I had no doubt.

So, I saw this trailer with a for sale sign and inquired. It was the lady from the diner. They were selling the trailer because they [she] didn’t want to go camping anymore.

Anyway, I didn’t like the trailer and decided not to buy it. 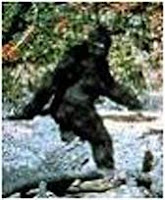