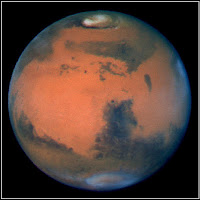 In the original War of the Worlds, the one set in England, not New Jersey, the story starts out talking about intelligences.  Intelligences that have been watching Earth.

Over at Science Fiction Trails we're putting together a special issue of our magazine.  It's our first and only all Martian issue.  We've got Martians in stores and Martians in Indian camps.  And we've got humans going to Mars in the spirit of Jules Verne's From the Earth to the Moon.  So, if you like Martians, then mark your calendars for September 1st cause that's when it comes out.

This issue almost didn't make it.  The first wave of stories were dreadful--and not one them had a Martian in them or even mentioned Mars. They were just mindless alien stories.  But, I resisted the urge to shoot myself and, finally, the issue started to take shape.  The Martian issue had no western content requirement, but most of the stories were still set in the American west.

Anyway, if any Martians read my blog and are interested in co-publishing a Martian edition, let me know. I don't read the Martian language.

The picture kind of looks like Earth, in a reddish sort of way. I'm told it is Mars. It's bluer than most Martian photos that I've seen.

Anyway, I'm reading a book by Gustavus Pope called Journey to Mars.  It predates War of the Worlds, but is more in tone like the John Carter books written by J. Edgar Hoover under his pen name of Edgar Rice Burrows.  I haven't finished it yet, but it's not bad.