Over at Science Fiction Trails, where I am publisher, we do the occasional book anthology as well as our ongoing magazine.  So far they've all been horror related.  As I think back on the stories I've come to wonder about something: I have never had a story submission about a witch or skeletons.  Not ever. I would've thought that I would have seen at least one by now.

Skeletons are not that common, except in those low budget Sinbad type movies.  And witches may not mesh with notions of the wild west.  Still, the fact I've never seen one submission along these lines puzzles me a little.

Nor have I ever seen a mummy, though there was something sort of similar in one story in Six Guns Straight From Hell.

It's just an observation, really. I'm more a fan of ghost stories which are also quite rare. That's what we're working on now, western ghost stories.  It's too early to tell how this endeavor will turn out. Stay tuned. 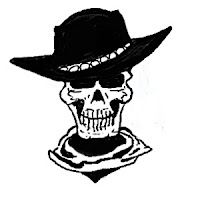