The new issue of Science Fiction Trails is officially releasing Wednesday, but is already up on Amazon.  It will be followed soon by a special Martian issue.  We have more alternate world stories this time around. We've also got a little steampunk.  For those who've been living in a cave, steampunk has kind of turned the world of speculative fiction on its ear. There is now steampunk fashion and even steampunk music.  I just filled out the annual participant questionnaire for Mile Hi Con and I was amazed at how many steampunk panels they're considering. I've even heard a rumor they're considering a steampunk tea.

To this, I just noticed that Tales of the Talisman seems to be having some trouble finding enough steampunk stories for their magazine, if I interpret editor David Lee Summers' blog correctly.  I'm not surprised. There's a lot of interest in it, but I don't see a lot of stories in this area.  And if I get a good western steampunk story, I'm sure not letting it go to a rival publication.  It's a friendly rivalry, but a rivalry nonetheless.

Our book division is considering a steampunk anthology next year. That's still in the discussion stage and is not a done deal.  Still, steampunk has really proven to be way more than a fad. Not only in science fiction, but even horror is chasing that rare steampunk story right now. 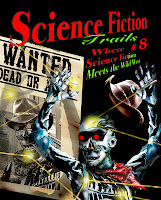