Another Review of Science Fiction Trails 8

Another review is out!

edited by David B. Riley, cover by Laura Givens. 87 pages in large size with nine stories.

The SF Trails anthologies are ‘weird western’ stories and the editor has been building an excellent stable of writers in this sub–genre for quite a few years now. (And yes, one of them is me but not in this issue so I feel free to say that and do a review.) General comments – excellent editing, and the cover is dynamic and eye-catching.
This issue starts out with Lou Antonelli’s Pirates of the Ozarks. I found the story interesting on three levels. It’s a rip-roaring tale of derring-do, it also quietly sneaks in a number of genuine names from history, and finally, while I can’t be certain, I think that geographically the idea of a huge inland sea, just where Lou has one for the purposes of the story, is correct. That makes it three for three and I loved the story. Sam Kepfield’s They Zapped With Their Boots On, I enjoyed for very similar reasons. It’s an alternate world story, and very nicely realized. The third of the stories I most enjoyed was Dave’s The Dinosaur Who Loved Twinkies. Again, some historical background, and it made me smile – more than once. The other stories were all good solid work.
This is a growing sub-genre, for years I’ve sold the occasional weird western story to David, and for years his was almost the only market that wanted them. But this past two or three years I’ve observed that an increasing number of anthologies are opening for submission. Full-length books are being accepted in small press markets, and genre anthologies are now often accepting this sort of story where years ago they weren’t interested. I won’t say that this is entirely down to David, but I do think that his Trails series has had a lot to do with it. And long may that continue.. 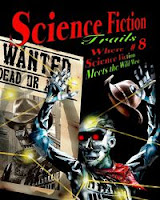