Well, I'm not entirely happy with the new issue of Locus.  Yes, they did mention both new issues of Science Fiction Trails in the new magazines received section.and that's a good thing.  But they didn't use the cover of either magazine. And, they placed the cover of some other magazine between the listings of both issues. That is not so good. But, they say any publicity is good publicity. At least they mentioned them. I get the Kindle ebook version, no idea if this is true about the print issue.

In case anyone's forgotten, the actual covers appear below.  Buy some copies and hand them out to seniors at local nursing homes. They'll be so confused. Why has this covered wagon got legs? 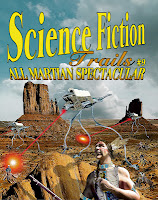 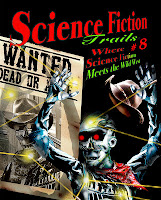