I’m guest blogging today because Dave’s gone off to Mile Hi Con. I don’t know what goes on at those things. I’ve never actually been to one. Nobody ever invites me anywhere. I figure they have lots of dancing girls and liquor and stuff like that. And everyone sits around and drinks beer and talks about astronomy. Maybe it’s best I didn’t go, come to think of it.

I don’t drink. You don’t want to see a drunken dinosaur. It’s not a pretty site. Staggering around, knocking over trees, eating fruit, stuff like that. Then you throw up over yourself and some triceratops starts laughing at you. It’s just better not to go there. We didn’t have liquor stores back in the cretaceous, but sometimes dinosaurs got into fermented fruit and stuff. And if you’re a plant eating dinosaur and you’re drunk, then some apex predator like me comes along and eats you. Trust me kids, there’s a bad side to getting drunk.

I made some suggestions for the con, but I never heard back from anyone. I said they could have a panel on time travel. Heck I’ve traveled sixty million years through time. I’m an expert. But do they want that? Hell no. They went with the zombie shooting gallery instead.

I also suggested dinosaur rides for the kids. They didn’t seem to like that one either. Then there was the Klingons versus dinosaurs battle to the death. I thought people could bet on that one. But they didn’t even want to do that, either. What a bunch of wimps. 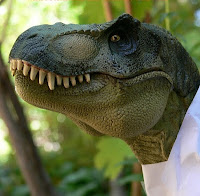