There's a new review up at SF Site. 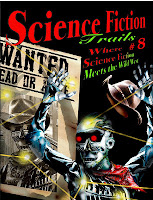 A review by Sandra Scholes


The art for this issue's cover is a new look at a character from an old story, the original robot was on the cover of issue #4 and, as it is out of print, fellow artist and writer for Science Fiction Trails, Laura Givens thought it would be a good idea to bring the artwork and the pesky character back for another airing. The theme this time around seems to be on alternate worlds. The emphasis is still on science fiction mixed with the westerns, but this was thrown in at the last minute and gave the whole magazine a new edge they thought readers would enjoy. Other interesting features include dinosaurs, steampunk and alchemy, something that issue #7 was notable for.

"Pirates of the Ozarks" by Lou Antonelli

This story starts out as a report directly for the President about the US Navy's attempts at stopping the pirate captain and his infamous men from ruining their trade and commerce routes. Lou Antonelli carefully crafts this tale with vigour, and gives the reader a rather nice twist at the end.

When Benjamin and Caleb stumble onto the body of a charred woman, Caleb thinks the culprits are the Indians, but Benjamin thinks it is unlikely as it seems as though something has fallen from the sky. In fact, whoever or whatever had done this had burned her clothes, and even her jewellery had melted. It is then the guys feel they are left with a real mystery on their hands. William K.D. Wood uses the fear factor to keep the interest with this one, as he puts the two of them in the danger zone when they do find who killed the woman. Don't read it with the lights on.

Seth Wilmouth doesn't like being interrupted when he wants to have fun with Hope, a pretty little redhead who works the Glenroad Saloon. She deserved her ingot after the night she gave him, but the appearance of Jacey J.Hartley makes him feel uneasy. There is something weird about the man, and he doesn't seem to understand other's privacy when he wants to do business. Raymond Broadbeard's story is a short one, but it does have a funny and satisfying ending that will leave you smiling.

These are some of the best stories in this issue, and science fiction does meet the Wild West and turns it around in a fresh new way. The stories are getting better each time, and it is a delight to see that David B. Riley keeps the same writers as he has established them right from the beginning.

Readers of the magazine will also enjoy Karl's Corner where the dinosaur sheriff catches up on his mail for the week. It's a nice spoof sandwiched between all the serious stories to lighten the mood. The author's notes that come with this issue are also of interest as they let the readers know how the writers have strived to verify the truth of their content, and research as best they can for the stories. Notes on where the stories have appeared before are helpful as readers might want to investigate those publications as well. Science Fiction Trails doesn't stray away from humour, as there is also a cartoon all about Outlaw Al and his escapades -- and he isn't as lucky as many might think.