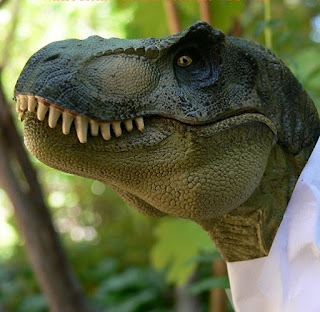 Hi, it’s me Karl.
I’m guest blogging today. Boy, I sure was impressed with that meteor in Russia. Meteors and asteroids really get my attention. That’s kind of what did in my friends and relatives. A big old meteor or comet came and crashed into what’s now the Gulf of Mexico and goodbye dinosaurs. For a long time scientists doubted this happened and blamed the extinction of dinosaurs on smoking too many cigarettes. Then that Shumaker-Levy comet hit Jupiter and people said “Wow.” With 200 million Jupiterians killed, people started thinking it might happen here. Then some oil company actually found the impact crater and that was that.

Now, I realize that humans would not be here on Earth if my friends had stayed alive. Human ancestors would’ve been served up for lunch by dinosaurs. Still, I kind of wish the dinosaurs had lived on. What I’ve been wondering is, when the next big asteroid hits and wipes out people, what will evolve? Of course, that’s only speculation. Dave, who I’m filling in for, wants dogs to evolve. I think he’s a little nuts sometimes.

Anyway, I’m the only dinosaur that got transported through time. If there were more of us, there’d be a lot fewer of you. I’m not saying that to be mean. It’s just the way it is. Dinosaurs are nice as can be, but we’ve got to eat. A lot of the Republicans in Congress don’t believe I exist. They don’t believe any of my kin ever existed. I should go to Washington sometime and eat some of these guys. Heck, that’d be a place for a meteor. No one would miss Congress if a meteor hit that place.

So, what will evolve next? Beats me. It’s one of those concepts best dealt with by science fiction writers and crazy people. Is there a difference?

I was going to write about my hunt for Bigfoot, but then I got going on this meteor thing. Till next time.
Posted by David B. Riley at 1:30 AM