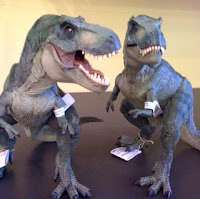 My pal Karl wanted to make a movie.  Well, the person who was going to help produce our movie never did anything and Karl's still waiting.  He was hoping to have a film where the aliens came to destroy the world and Karl ate them.
If that hadn't worked out, he would have liked to have played this dinosaur who wandered around the world playing chess with people.
And a third idea was going around giving massages to cute red haired girls. No wait, that wasn't Karl's idea that was one of mine.
But this Laura person who supposedly knew this director never did anything to get Karl's movie going.  So, movies about Karl saving the western town full of cute red haired girls from the Mexican bandits will have to wait. I'm not sure if that was one of Karl's ideas or not. It seems awfully familar  though.