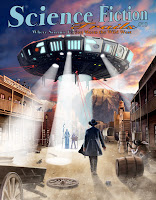 We recently held gunfighter week on this blog. We had excerpts of shootouts with ghosts and some other entities.  Today I'm going to ad another excerpt.  This one isn't a gunfight, but a story in the forthcoming issue of Science Fiction Trails. Brown, a border collie, has discovered a mysterious crash site. There may be a few more excerpts in coming days. There's a link at the top of the page to the Science Fiction Trails site.

Brown vs. The Martians Coming July 1st, 2013 from Science Fiction Trails Magazine
Excerpt by J A Campbell:
I stopped and sniffed again. Over the hot metal and other strange smells, I thought I smelled an animal, almost like a dog, except that didn’t smell quite right either. I stopped and waited for Elliott to catch up.
“What is that?”
The thing was shaped like a cow pie, although almost half of it was buried in the dirt. The part that stuck out of the ground went up into the air much further than Elliott could reach and made enough shade for us to get out of the sun. The ground wasn’t any cooler in the shade though. Black streaked the shiny metal and it looked like there were gashes, like claw marks where the black streaks were.
“It’s damaged,” Elliott said.
Elliott walked around until we climbed a pile of dirt and ended up standing over the strange metal cow pie.
Posted by David B. Riley at 1:30 AM