I will soon be going to Arizona for a few days. I hate Arizona. It's a desolate plate where homeless vagrants ravage the countryside much like the mythical zombie hoards.  It's so blasted hot that, when you go outside, you truly believe you've died and you are now in hell itself.  And I think their governor was the retarded girl in my fourth grade class who mysteriously disappeared around Thanksgiving.  All in all, it is a place of no redeeming qualities whatsoever.


But I shall go on my trip there.  And, whilst I am there, I shall steal the extra roll of toilet paper they leave in hotel rooms--assuming they use toilet paper in Arizona.  Why?  That's not an easy answer. As far back as I can remember, I've always taken the roll of toilet paper.  My mother used to wonder where these different brands of toilet paper came from. We'd go on a trip and then, in addition to the usual Scott's, there might be some other brand or brands in the cabinet.  My mother would not buy toilet paper, but that's a different and even stranger story.  Anyway, Mom eventually figured out that I was taking toilet paper from motel rooms.  No matter how often she forbade me, the extra toilet paper would turn up.


And, as the years go by, I still take the toilet paper. And I always will.   And, strangely, I've worked in hotels and I have never stolen a roll of the stuff--not once. But, present me with a hotel bill and any extra toilet paper in my room is history.  I scored two rolls at the hotel for Anomaly Con last month. I wonder how many I'll get in Arizona? 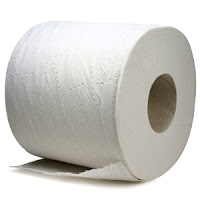