I spent some time in the store yesterday reading the labels on dog food packages.  This may be a bit weird as I do not own a dog.  It's just that when I was a lad I would try the various dog foods our beagle was fed. No one else in the family would. They were awful. It was no wonder he wouldn't eat them.  Later on in life, when my parents had retired to Arizona, they got a golden retriever.  I tried his food as well, though not the canned stuff--only the dry food. I couldn't take the smell of canned dog food.  I rather liked his Purina One.  The dog treats were a bit iffy--some were good though his favorite, Snausages, did not appeal to me.  Why did I do this?  Just wanted to see what the stuff tasted like.

Now, I was reading the labels because the days when there was just Purina and Kennelration are over. There's all kinds of premium and not so premium dog foods on the market.  I was curious about them. There was one dog treat from China I wouldn't feed to my brother.  Overall, most of the stuff seemed to be made of wholesome ingredients and I could eat a bowl in a pinch.  There's some ultra premium brands that are just at places we don't have around where I live.  That will have to wait.  Maybe I'll review some dog foods in a future entry. Even Costco seems to have their own dog food now. Lots of choices.  In the meantime, remember that dogs just love beans. And dogs do not seem to like Jello. 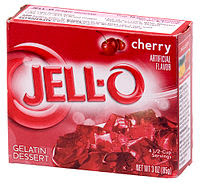