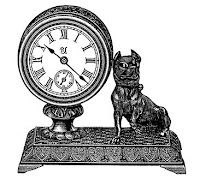 It always seems that there's never enough time for stuff. You plan to catch up on home repairs and suddenly the whole weekend is gone and you haven't got crap completed.  I used to wonder if I had so little time because I kept getting abducted by aliens and so I was missing time. Well, I don't think the aliens want me.  Still, there are days when I get nothing done.  And yesterday was one of them.
And this lead me to today's pondry.  Is there a god of time in ancient history or classical societies?  ﻿I sure can't think of one.  None comes to mind from the Greeks.  I have studied Mayan gods and even used one in multiple fiction tales, but I don't recall seeing one there.  Did ancient folks not place much priority on time? The Romans had sun dials that were fairly accurate, though I suspect sun dials were a subsidiary of Apollo [I know Apollo was Greek but I can't recall Roman equivalent and am too lazy to look it up]. So, who was this god of time?  I think I just got myself a new story idea. If I only I could find time to write it. And I think I invented a new word--pondry.

Addendum: I've been informed the Greeks did have a time god--Chronos.  Who knew?
Posted by David B. Riley at 1:30 AM