Happy July 4th everyone. You can review last year's post about buying fireworks from Chines gangs in San Francisco back in my youth. 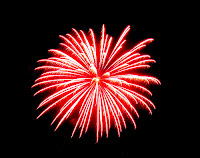 From last year's postings.
﻿
Growing up in California, we used to go across the bay to San Francisco. There, in Chinatown, you could easily buy just about anything you wanted.  On almost any street corner, some guy would ask "firecracker?" and you could reply, "bottle rocket." and then he would likely say something like "guy in red shirt, next block." Then you go to the next block, discuss the price and some little kid would come running up with a paper bag full of bottle rockets.  It was a remarkably simple transaction. If you wanted something like barrel bombs, which are even more illegal and much more powerful, they could be had, although you usually had to go to some third guy to obtain them.  And then pick up a bowl of hot and sour soup, hop back on BART and that was that.

Although the real fireworks were illegal, every July fourth roared with exploding skyrockets and the rat-tat-tat of firecrackers going off.  My favorites were the bottle rockets. They only cost a little more than firecrackers, yet they flew. A tremendous value. And, the biggest lesson learned from all of this--the illegal fireworks purchased from the friendly and efficient Chinese gangs were actually cheaper than the safe and sane fireworks sold legally by price gougers operating in the name of some dubious nonprofit organization.