One thing I always thought I should do was get dressed up like Santa Claus and wander around on Christmas eve muttering "Damned blasted reindeer took off and left me. I ain't Fu*!@in walkin' back to the North Pole."    Alas, I've never actually done it--figuring it probably wouldn't go as well as the original concept.  Still, it's no stranger than anything else about Santa.   If I sat in a chair and asked girls I don't even know to sit on my lap, well it just doesn't go over that well. Put on some red suit and they hop right up.   Face it, Santa Claus is a bizarre individual.  So, stranded Santa isn't any stranger than anything else with this guy. So, if I ever do this, these are the lines I was thinking about.


"Hey buddy, can you take me to the North Pole? Yeah I'm fu*in serious. Should've given you a lump of coal when you were six instead of that damned bicycle." [taxi drivers only]


"Hey lady, can I sleep on your couch tonight?  Fu*in reindeer stranded me.  Hell, I been watching you sleep for years."


"Well, thanks for the milk and cookies, but I'm lactose intolerant and what I really need are the keys to your car."

"Hey kid, Santa's not really sleeping in your yard. It's all a dream." 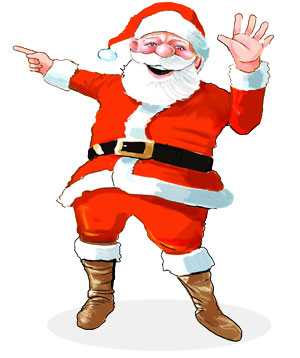