Surveys are a tool often used to make marketing and even political decisions. Can they be trusted?  I don't know.  We tried a few surveys with Steampunk Trails, where I am publisher.  We tried them on the magazine's blog. We tried sending them to people who bought the darned thing. Heck, we even tried putting surveys up on other sites.  The result was about the same--hardly anyone bothered to respond.  We wanted to know what people wanted. Did they want interior illustrations? Did they like a few nonfiction articles?  Did they like short fiction or longer, more developed, stories?  We don't know. We couldn't get anyone to tell us.


So, when Story Emporium debuts next month, we're basically going back to our roots.  It'll just be a fiction magazine. There won't be any nonfiction, except for  few short book reviews.  There won't be any interior illustrations, either.  It will have a really cool cover with dinosaurs on it.  And I think the stories are pretty good too.  Our roots are Science Fiction Trails.  That's what started all this.  A decade of experience there is what influenced our decisions now.  Of course, it's not all science fiction this time, but a broader range of stories. 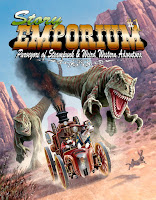