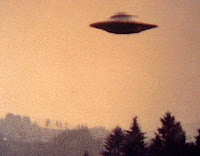 It was not much of a secret that, back when I was editing Science Fiction Trails, I had a particular fondness for stories involving flying saucers and or little green men.  I'm not entirely sure why that is.I'm actually a UFO skeptic.  Nonetheless, I am somewhat fond of stories with flying saucers in them.  Surprisingly, I've actually had very few such stories submitted to me.

Why do I bring this up now?  Well, I've been reviewing my notes about Martians.  I'm co-presenting something called 19th Century Martians at the rapidly approaching Mile Hi Con.  Seems a heck of a lot of folks in the 1800s believed there was life on Mars.  Ah, those were simpler times.  And people were seeing canals and getting messages from Martians all over the place.  Why? Maybe there really were Martians. Maybe it was some other things at work.  But that's what the presentation is about.

On a related note, I'm also seriously considering hosting an Invaders party. That would involve sitting around and watching the 1967 TV show The Invaders.  There's nothing else quite like it.  It was a network prime time show put out by Quin Martin--the folks who made a lot of cop shows back then. These alien guys were really mean and had some serious weapons.  And, back then, I thought it was about the coolest thing I'd ever seen.  So, am I reliving my childhood or is there something else wrong with me?  The jury is still out on that.

At least I stopped talking about light bulbs.
Posted by David B. Riley at 3:15 PM