As it's Halloween, I post my often reprinted story once again...

THE HIGHWAYMAN
by
David B. Riley

He hoped the commander wouldn't find out what he was doing.  He doubted he could explain why he was 100 light years off course.  If all went well, he wouldn't have to. Kal looked around.  Surely, this was too easy.  He switched on his voice translator and readied his ray gun.  It was time.


He climbed out from the bushes and strutted boldly up to the front door.  A slight sense of dread was trying to overcome him.  He fought it off.  If only humans weren't so darn big.  He reached the porch.  His antennae were vibrating from the music inside.  At least they were home.  He readied his ray gun and pressed on the door bell button.  He liked the pleasant chiming sound it made and rang again.

Slowly, the big door opened and he peered up at a human female.  He raised the weapon.  “Give me Earth food now,” he ordered in his most forceful manner.

“Oh, George, come quick.” It's summoning its mate,   He prepared to fire.  Then, a human male arrived holding a tray of candied apples.

“He's so cute.  Just like a little space man,” the female said.

“Of course.  You've got a long way to get back to your planet,” the male said.  A very sensible individual.

“I just made them,” the female stated.

He placed one in his loot sack.  It was so big he decided not to ask for more of them. He didn’t want humans to think his kind were greedy.

Kal scurried back across the street.  A small human female wearing a mask ran towards him.  He readied his ray gun, though she looked young and harmless..

“They got candy apples?” she was asking.

“Yes.  They look good.”  He held tightly to his sack in case she tried to grab it.


“I'll go get me one.”  She trotted across the street.   Kal holstered his weapon and watched in amazement.  Without any weapon, the young female obtained a candy apple from the elderly couple.  Kal reasoned the mask must be frightening to humans.  The young female stood at the edge of the sidewalk and waived at him.  “Happy Halloween,” she yelled.

“Yes, happy.”  He felt oddly pleased the young child called Halloween had gotten an apple as well.  Earth food was so addictive.  He headed for the ship.  This had worked so well he would try it again, tomorrow. 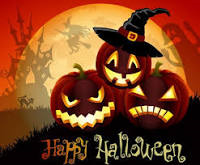