In most of the country folks are doing spring things.  Baseball gloves are coming our and bicycles are getting tuned up.  Not where I live. It snows just about every day and there is no relief in sight. In fact, they've extended the ski season another week.  I wanted to go somewhere this weekend, but I really don't like driving through snowstorms.  And the forecast is not looking good. So, I guess I'll stay at home and paint a room or something.  At least paint doesn't stink like it used to and you can actually paint in winters without freezing with all the doors open

I'm pleased to announce my story "The Governor" will be released in an anthology called Lightships & Sabers  on April 18th. The book is edited by J. A Campbell and Rebecca McFarland Kyle. It's about a spoiled Imperial princess who suddenly becomes governor of a horrible place that is in a state of insurgency.   "Please buy hundreds of copies for all of your friends." 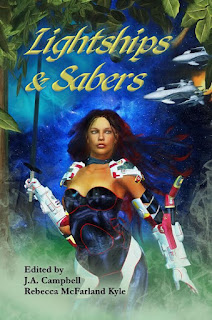 Guerrilla Easter Eggs?  If you don't like someone's Easter eggs, take things into your own hands. Where I live in Colorado outside Easter egg hunts are rare as it's usually snowing.  Back when I lived in California some neighbors used to put out purple eggs for their kids, and some really cheap chocolate bunnies. I'm sure the kids enjoyed finding the eggs.  Then I decided to jazz things up a bit. Not only did the family's three kids come inside with purple eggs, but brightly colored orange ones as well.  And a peanut butter bunny, no less.  Now, the parents were baffled by this--and kind of worried. They knew this was not anything they'd set out.

The Easter Bunny had simply gotten more generous in the eyes of the kids. The parents, however, were convinced some fiend was trying to poison their kids.  I do not know how things worked out that year--whether they were allowed to eat the mysterious orange eggs or not.  It was one of the best Easters I ever had.

Pancakes come out of a bag? They do at a certain fast food restaurant.  Premade and heated in a microwave.  We do not have a place that sells inexpensive fresh breakfasts. Coffee shops? Not here, amigo.  So, my desire for some fresh hot pancakes yesterday did not have a happy ending.  There just aren't many places serving up the golden cakes of wonder.

Bananas, good topping.  Blueberries are awesome. Strawberries ain't bad.  Pineapple just doesn't work for me.
Posted by David B. Riley at 12:30 AM No comments:

My books have been selling fairly well. Of course this makes me happy. It also puzzles me a bit. I haven't got any new books out, except for The Martian Anthology and it's not what's selling. The books that are selling are the my older works, like my novels and short story collections.  Markets are fickle and that could quickly change.  You take what you get when it comes to selling books.
Posted by David B. Riley at 1:00 AM No comments:

I just bought a toilet. Since I'm selling my house and my toilet was all broken down with a busted lid, it was decided to buy a new one.  Boy, do I love this toilet.  I could easily spend the rest of my life sitting on it.  And I would never have to go anywhere to poop.  I almost wish I wasn't selling my house as that will mean leaving the new toilet behind.
Posted by David B. Riley at 12:42 AM No comments:

Well, I am dealing this week with the exciting world of real estate.  It's so much more complicated that buying stock or buying a car.  In my case, I'm not really buying but selling.  And I'm selling a tight market where there is not much supply. Still, you get the tire kickers roaming around your house. They have no intention of buying anything.  They just deliberately waste people's time.  It is not fun.

So, I've been working on a few projects.  It amazes me how some places take months or even years to respond to a submission and others get back to you in a few days.When I've edited anthologies I usually know right away if a story is not going to work.  I guess some people have more trouble making up their minds.  Then there are the ones you like right away. And then there are the third bunch that could go either way.  These usually require a second reading.  And that's how it works.

Unless you go to a con and they have editors there on some stupid panel.  The vast majority insist they toss a story after a few paragraphs.  I was amazed at how little time they take.  I almost always look at three or four pages. And I will likely skip to the middle if the front paragraphs aren't working. This is because the first start off may be lacking, but it might pick up with a little momentum, Yet almost every editor I've ever seen at multiple cons says they only look at a few paragraphs before they toss it.  Assholes.

Each editor has his or her own way of doing things.  But I still contend you can give a story or a manuscript more of a fair shake by reading more than a couple of paragraphs. If you don't want to read this stuff, then don't edit anthologies.

Then there the places that never respond at all.  I have a book manuscript that's been once place for two years now.  Of course they never looked at it.  But do they bother to respond? Hell no. Assholes.

And that's the way it works.  Cynical aren't we.

The Chinese restaurants where I live do not sell fried won ton.  I do not know why. There is a restaurant in Denver that does have fried won ton. But I don't often want to drive 200 miles for some golden fried batches of heaven.  In fact, I haven't had any won ton in about three years.  Today, I'm going all the way to Denver to get me some won ton. Yay!

Spent the day cleaning my house. I'm not a very good housekeeper. I don't like cleaning. Nonetheless, every ten years or so one must clean their house [ha ha. that's a joke].  Whilst it would be nice if little elves would stop by and clean for me, that just doesn't happen.
Posted by David B. Riley at 12:30 AM No comments:

Let's have another Spanish lesson.

No, we do not have a camera in the garage. No, no tenemos una cámara en el garaje .

Where is the frozen body? ¿Dónde está el cuerpo congelado ?


The space aliens want sixty dollars and a ride to McDonald's

Back a few years ago Hostess had Snowballs along with Twinkies and some other stuff. Then they fell on hard times. They’re back now and most stores have at least Twinkies on their shelves. I rarely see Snowballs.  They used to be pink. Around certain holidays they’d color them. St. Patrick’s Day they’d turn green. Around Easter they’d turn yellow.  And they were often orange for Halloween.  Now, in the few stores that have them, they’re white all the time.  They don’t change color anymore.  And they don’t seem to my palate to be as gooey. Whilst I like them, I liked the old ones better. Right now they’d be green as St. Patrick's Day approaches.  Every time they used to change color, I’d buy a package–maybe two.  I thought it was pure genius. 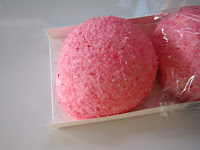 I'm already sick of the Presidential Election and we've got to listen to this nonsense until November.  Our election cycle is too long in this country. The British can do an entire parliamentary election in just a few weeks.

So, my solution is to go to Burger King and try one of their new hot dogs.  I doubt they're all that great, but we don't have a Sonic around here.

There isn't much in common between hot dogs and politics.  And that's my point.
Posted by David B. Riley at 12:53 AM No comments:

It seems a lot of guys are running around with beards right now--myself included.  One theory is that razor blades have deteriorated a lot in quality and gone up a lot in price. A lot of men say they can't get a decent shave anymore. Sadly, very very few barber shops will do a nice hot lather shave these days.  I find myself in this category as well.
Posted by David B. Riley at 5:44 AM No comments:

As I consider what cons I'll attend this year, I'm somewhat struck by the number of cons I don't really want to go to.  A lot of it is travel.  They're too far away and too expensive.  World con in Kansas City is only a one day drive, but I just question whether it's worth going.  The hotel rates are quite high and the membership tab is astronomical.

Then there are other cons that I've had bad experiences with.  Some kinds treat people great, but there are some that are horribly run and make you regret going.


And then there are Texas cons.  For some reason I have never been wanted as a program participant at  con anywhere in the Lone Star State.  I reason that it's most likely because there are some many local writers they don't feel they need me.  Maybe everyone in Texas just hates me.  I don't know.  But I no longer make any effort to attend cons there.


And, to add to the confusion, I have no idea when my new science fiction novel will come out as I cannot get a release date from the publisher. My lack of a novel in quite some time kind of diminishes my value on the con circuit. Sure, I've edited tons of anthologies and written lots of short stories, but authors are really judged by their output in novels.  That's the currency of the publishing world.
Posted by David B. Riley at 12:30 AM No comments: