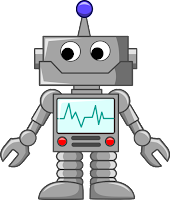 They say it's not just foreign countries that are taking away our jobs.  It's robots.  Robots don't look like the big walking tin cans I grew up looking at on Lost In Space.  Today's robots are built in the walls of factories,   And they're everywhere.


Automation has wiped out the job of bank teller--both direct deposit and the atm machine have eliminated thousands of jobs.  Even the post office is using robots to deliver the mountains of packages this holiday season.  Look at a USPs video of their automated mail sorting plants then look at post office seen on Miracle on 34th St.


Until my recent retirement, I worked for a large hotel and property management company.  Another hotel company tried automated check in. They quietly dropped it. Folks didn't take to it.  But automated check out, where you can review your bill and check out on your TV set has proven quite popular--especially in larger towns like Las Vegas.

So, don't be too surprised in the not too distant future if there's a robot in bed with your daughter instead of some fat old guy in a creepy red suit.


And then there's this, just last week;