Today is garbage day. The folks come by from the trash company and pick up my can of trash. Then they return a little bit later and pick up my recycling.  In our little gated community most of the residents recycle at least some of their stuff.  we have special recycling cans that are brown, instead of blue, for some reason. Since recycling is included in the price, it's hugely popular.

Wasn't always that way. Industry didn't want the stuff, save for aluminum cans.  And they wanted you to sort it.  gradually, industry found ways to use recycled materials and curbside no-sort required was much more popular. 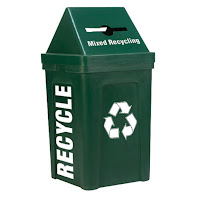 One of my first published stories involved the world of garbage.  A trash truck driver becomes obsessed with killing a homeless bum who sleeps in trash dumpsters.  Well, it didn't work out quite like he'd hoped. "I'm not reprinting "Dumpster Man" because there really isn't room for it here.