Well, the new Doctor Who has finally arrived.  I never took to the last one. It wasn't really his fault as I thought the story lines were simply awful. I quit watching the show.  So my expectations are low. After they regenerated The Master, The Doctor's arch nemesis, into a woman I wasn't all that surprised to see a female Doctor come along.

I hope the Doctor gets a dog. I don't mean a mechanical one like Tom Baker had. I mean a golden retriever.  A dog can play fetch and go get help when the doctor falls in a well. .  It'll be great.  Maybe she won't fall in a well, but I kept wishing Capaldi (the outgoing Doctor) would have.

Actually, she's a nice looking woman. I hope she wears short skirts. And I hope her travelling companion is another hot redhead like Amy Pond (yes, female).  I'd watch the show then. Yep, put the doctor in short skirts, hot female companion and a dog--preferably a golden retriever.  That would work for me.  Unfortunately, the BBC doesn't care what I think.  I wish they'd let me write some of the episodes, the ones where she puts on a skimpy bathing suit and so does her hot companion and they go fight the Daleks on the beach. That would be cool.

Is this kind of sexist? Probably.  But I know what I like and that's what I'd like to see with the show. It'll never happen.  W.C. Fields said never take a part opposite little kids or dogs--they'll upstage you every time.  The dog idea won't fly.  Maybe I can hope for short skirts though. 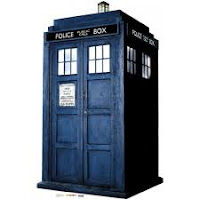