I caught something the other day that got me thinking. It was one of those internet surveys. This one wanted to know who created the best science fiction worlds.  Some of the choices were Star Wars by George Lucas, Gene Rodenberry's Star Trek and a few more. These are all highly subjective.

Well, my world is California.  No, I didn't invent it.  But my 1880s California is the setting for quite a few stories.  It's got sea monsters, a devil, a Mayan god, and few sexy angels.  It's no different than Star Fleet command–except this is my universe and it's much smaller.  And riding around in this universe is Miles O'Malley–one time barber and now federal lawman.

Miles gets into all kind of trouble, but not by choice. He's not greedy or trying to take over the State of California. His troubles root to his sense of good and bad or right and wrong.  The Mayan god I mentioned wants to take over  California. Miles takes him on in order to protect the good citizens of the state to the relief of the United States Government, which hires him as a Secret Service agent in gratitude for all he's done for them.  You can take in most of Miles's adventures in a triple novel tome called The Devil Draws Two

But wait there's more.  Not only does Miles populate this world, but so does Ling Fung.  This Chinese businessman encounters some very strange things in his quest to assimilate into the California lifestyle including a Yeti [That's Yeti, not Sasquatch] looking for a mail order bride. And a Mayan god [oh, that sounds familiar but I was talking about Miles then]. And he could have lunch with the local cannibal–and may end up on the menu.   All while dealing with racism how to get along with white people. That is one of two novellas in a book called Legends of the Dragon Cowboys.

And that's my universe until  now–sort of.  I recently signed a contract to publish another novella, Fallen Angel which is also set in this universe. It features a fallen angel named Mabel She's quite the handful as she's tired of living in hell and decides she needs more excitement in her life. So she takes up counterfeiting to fund her lavish lifestyle and sets out to have some fun in California. Oh, didn't I mention Miles works for the Secret Service?  I think I did.  Then there's Kevin, Mabel's sister. Now she's just plain crazy and you'll be amazed at what she's been doing.

And that's a very brief summary of the Miles O'Malley world.  It's available, except for the latest book, Fallen Angel, right now.  And that book will be along soon, although a release date has not been announced. 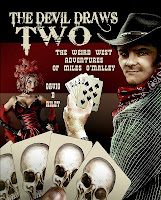