Sisters of the Wild Sage


I was fortunate enough to receive an advanced copy of a new author collection from Nicole Givens Kurtz. Sisters of the Wild Sage is certainly not a bunch of lawmen running around taking on the forces of evil. Most of the action is set in Wild Sage, New Mexico.  There's a quote that says a lot. "When someone with a pistol meets someone with a magic wand, the pistol loses." These stories are about women, for the most part–women of color. And Kurtz lets loose with her having lived in New Mexico, the wind, the night sky are powerful forces here. And the story is just as likely to take place in a hogan as anywhere else.

In the interest of disclosure, I was the original publisher of one of these stories. "Justice" first appeared in Six Guns Straight From Hell back around 2007. Maybe I'm biased, but it's still my favorite story in this collection. It actually has a sheriff in it, but none of that matters as justice asserts itself in a Navajo hogan. 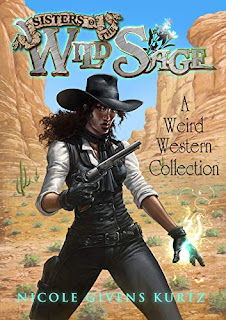