My mother was thrilled when they decided to do the moon landing on her birthday. I've been somewhat amazed at how little interest there is in the 50th anniversary of this event.  Back then the whole world was glued to their TV sets.  Yet, at a recent convention, I gave a talk about moon stuff and hardly anyone even showed up.  Stories of the day predicted we'd soon have bases on the moon.Well, that never happened. I guess the problem was there simply wasn't much going on.  If they'd found gold, things might have turned out differently.  But they just brought back a few hundred pounds of rocks.  We benefited greatly from the space program with improvements in computers, commercial uses for laser beams, improvements in food storage yum freeze dried,

As I think back to how mesmerized people were, locked on to every development, it's kind of amazing how little interest there is in the 50th anniversary.  But that grainy picture of Neil Armstrong stepping from the Lunar Module and onto the lunar surface is still very clear in my memory.

If I'd been an astronaut, and I was 10 years old then, but if I'd have been an astronaut, I'd have pointed somewhere off camera and said "What's that?  It's coming closer! And then screamed, followed by silence for a minute or so.  Then a just kidding. Well, that's why I'm not an astronaut. 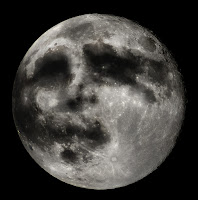